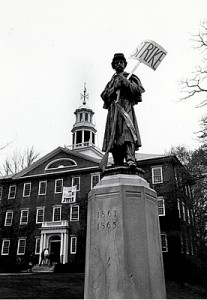 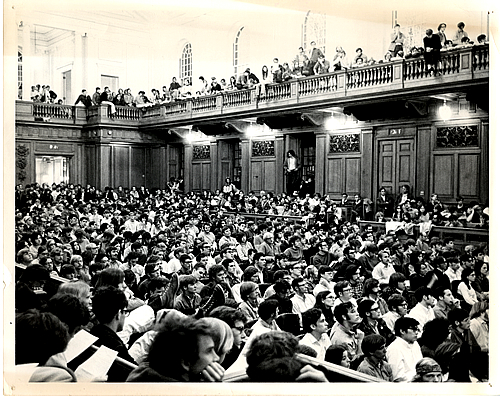 Update:  This March, 2020, the Williams Record wrote a retrospective on our Spring, 1970 Strike , quoting Jim Lobe and Bob Katt, ’70, extensively.

Many of you have asked for more information about the strike and class cancellations.

The students started a campus strike, part of nation-wide campus strikes, following the invasion and bombing of Cambodia in May, 1970.  Quoting the Williams Record:

“After a marathon meeting Wednesday, [May 3, 1970] lasting nearly three hours, the faculty voted to cancel formal classes for the remainder of the year and allow students to choose several options for the completion of their course work.”

“Wednesday night in Chapin Hall, over 1300 people gathered to hear the announcement of the Faculty’s proposal for dealing with the remaining portion of the academic year in light of an indefinite strike….

History Prof. Robert G. L. Waite stood up and cut through the administrative questions…as he said,

‘We applaud our common effort to end this bloody war,’ receiving wild applause.  ‘Let’s be through with this chickenshit and get on with it!’ The onlookers again broke out in wild applause and gave Mr. Waite a standing ovation.”