Did We “Drop the Watch?” 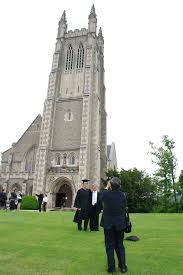 I just learned that Williams has an old tradition, “continuous” since 1917, of dropping a heavy pocket watch  from the chapel bell tower on Class Day to see if it will break.

The heavy pocket watch apparently comes from Williams’ pre-WWI “dress code” where male students traditionally would wear a pocket watch in their side pocket in their top hat and tails outfit.  The watch was attached to a chain….

Since the tradition started in 1917, and American entered WWI in 1918 indirectly after the sinking of the Lusitania ( “Dead Wake: The Last Crossing of the Lusitania) some could say the first “watch dropping” was followed by “bad luck.”  What do you think?

Instead of “dropping the watch,” I think Jeff Krull wrote our Class poem, “The Ivy,“which brought us all good luck.

I was working in Boston two weeks before graduation on a job generated by my senior thesis that started my life-long career in communications law and new technology.  So, probably I wasn’t on campus for “Class Day.”

I’ve never heard any mention of “Dropping the Watch” by anyone in our class, so must, in ignorance, deny it happened, and that the Class of ’70, in its focus on the Cambodia Bombing Student Strike and preparing for finals, had other things on its mind….

If you “Dropped the Watch,” witnessed it, and know that we “Jumped the Shark,” please include your comments in the Post Reply box below.