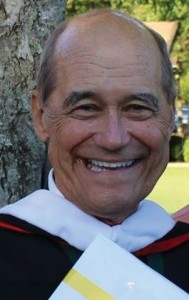 Win’s fruitful career as teacher, mentor, and coach began at St. John’s School and continued after graduate school at Charlotte Country Day School, where he served as Department Head of Upper School Modern and Classical Languages. During his 40-year tenure, he taught and mentored countless students with steady patience, thoughtfulness and congeniality. Thanks to his mentor John Rassias, Win believed that if one can’t speak a modern language, one doesn’t know it. As department head he compellingly promoted the importance of developing and measuring oral proficiency in ways that transformed foreign language instruction at CCDS. In the sports arena, he transitioned the boys’ soccer club into a varsity sport, and coached girls track and junior varsity boys’ golf. He also elevated football season’s Chain Gang into a reliably entertaining costumed affair, and engineered and supported myriad service projects.

In addition to teaching and sports, Win loved good food, good wine, and good times spent outdoors in the company of family and friends. An avid Panthers fan, he also delighted in fishing, enjoyed white water rafting on the New and Gauley Rivers, and hiking–particularly in the High Peaks region of the Adirondacks. And then there was his passion for scuba which began in 1965. Win became PADI and DAN instructor certified, and enthusiastically spoke of scuba instruction as his “non-day” job, relishing the introduction of the wonders of diving to students of all ages.

A lifelong Episcopalian, Win cheerfully served at St. John’s Episcopal Church as vestry member, usher, verger, and point person for the holiday angel tree for over 25 years. His faith and sense of adventure inspired a trip to Spain with Toni, his wife of 40 years, for a Camino de Santiago pilgrimage in June 2012. As Win averred to the end: “It’s about the journey” and “Have fun.” His life’s trajectory reflected those values until his last breath.

One thought on “Robinson, Win”