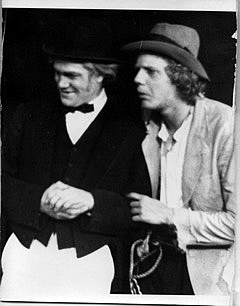 I am attaching a photo of Jeff Nelson and me in “Waiting for Godot”, Spring 1970. We are gazing—I proprietorially, Jeff in amazement— at Pozzo’s (my) manservant, Lucky, played by Dave Strathairn, 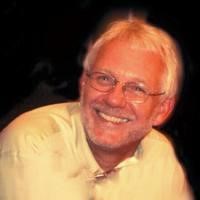 Jeffrey Nelson-editor, writer, producer, director, actor, husband, father-died in Summit, NJ, on November 14, 2015, after a long illness. Nelson was the producer of the film The Return of the Secaucus Seven, written and directed by John Sayles, who said it was Nelson who suggested he shoot his first movie in North Conway, NH, where they were both members of a summer theater company. Nelson made a cameo appearance as “The Man” in that film. He also produced John Sayles’s second feature film, Lianna.

Nelson spent over a decade at Sesame Workshop, in creative development and as producer of numerous Children’s Television Workshop programs, including the multiple Emmy-winning Square One TV. For the Bank Street College of Education, he produced the first season of The Voyage of the Mimi, a science-adventure series on PBS featuring a very young Ben Affleck. He would go on to produce 13 accompanying documentaries and write the book adaptation of the series’ second season.

For the past six years, Nelson was a writer and producer of educational media at the Center for Children and Technology, which investigates how technology can influence and enhance teaching and learning.

Born in 1949 in Wilmington, DE, Nelson attended schools in England and Switzerland prior to attending Williams College (French), where he earned his B.A. Maybe it was his polished demeanor and glimmer of European panache that drew some of Williams’s most creative and talented fellow theater students to Nelson. These included David Strathairn, Gordon Clapp, Adam LeFevre, and John Sayles. He became their natural leader, a position he maintained to some extent, in one way or another, for the rest of his life.

Nelson eventually took over as producer of the company, while continuing to act and direct, running the company for four seasons. In life as in film, Nelson in some ways always remained “The Man,” tolerating obstreperous or truly nutty behavior from his decades-long friends, though with wry humor and rarely with true irritation. He also had a great capacity for inspired lunacy.

As well as great love. In 1986, “looped in the loops of her hair,” to borrow a phrase by Keats that Nelson recited at their wedding, Nelson married Irene Kelly. They had two children, Derek, 25, and Lucy, 22, whom Jeffrey adored and admired in equal measure.

Nelson will be remembered for his humor, his kind heart, his gentle charm, his intellect, his erudition, his wit, his humility, his commitment to work, his precision, his gift for organization, his talent as toastmaster and raconteur, his love of books, his elegant tastes, his dedication to his friends, and his devotion to his family. (New York Times.com, December 2, 2015)