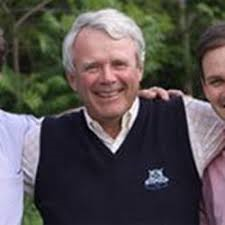 Kim R. Montgomery, 66, died in Middlebury, after having suffered from Alzheimer’s disease over several years. That morning his room was filled with family and friends, including his granddaughter and a dog. Kim was a graduate of Williams College (1970), and the University of Pennsylvania Dental School (1974). It was while in dental school that he met Susan Church, whom he lovingly dubbed  Q, his wife of 40 years. Together they moved to the hills of West Virginia working for the National Health Service Corps, where he began his practice, providing care for those in need. In 1977, they moved to the Northeast Kingdom; then Bristol, where he opened his private practice; and Cornwall where they lived, and raised a family. He balanced his work as a dentist with his many passions: golf, bird hunting, dogs, his family and friends. His essence was charm and a quick wit that would range from a quip to a story that would result in hilarity. That sense of humor was always present at the dinner parties hosted by him and Q, be it a holiday or a Saturday night. Those evenings inevitably ending in the “duckhouse” for a nightcap and music by James Brown. Golf season took him to many places, while fall would begin the season to bird hunt with his beloved Brittanys and Labradors. All of that was fit in-between traveling to watch his sons play whatever sport was in season. His creative humor and sense of fun are what will be remembered by all. He is survived by his wife; sons, Peter, Ross and Carr; daughter-in-law, Annie; and three grandchildren, Brewster, Mason and Beatrix. (The Burlington Free Press on Apr. 28, 2015)