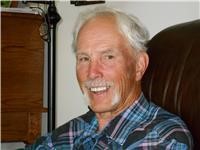 Jim “WJ” Anderson passed away July 8, 2016, after a valiant battle with his tragic affliction. Long time cowboy and guest ranch owner, Jim was born in Connecticut, raised on a farm in Middlebury, Vermont, and educated at Holderness School and Williams College where he excelled in football, alpine and Nordic skiing and lacrosse.  He was an American Civilization major at Williams.

Introduced to the west by his grandmother who took his brother, Hank, and him to the Elkhorn Ranch outside West Yellowstone every summer, Jim drove to his first job at the Elkhorn shortly after graduation and his marriage to Cheryl Payne, mother of his daughter, Lacey Dawn, and never looked back. He was the first easterner ever hired to the position of wrangler by then managers, Ron and Barb Hymas. He was an astute and quick study, learning to train mules to pack, pull and ride, a combination achieved by few mule trainers. He was seen for several years perched on a buck wagon driving an eight-mule team in the Ennis 4th of July Parade. (Bozeman Daily Chronicle, July 13, 2016)